As already discussed in my 18th century underwear post, and my post about my cosplay of Claire Fraser’s red dress, my approach to these costumes was to use patterns (from Reconstructing History) that are designed to reproduce 18th century clothing.  For men, the 18th century “suit” consisted of the shirt, the waistcoat (which we would call a vest), breeches, and stockings.  In the show, Jamie has a couple different black suits and several different waistcoats.  Again, Terry Dresbach, Outlander’s costume designer, has a blog that gives tons of information and pictures.
I showed Wade pictures of the different waistcoats, and he liked the light grey waistcoat with the embroidery the best.  While I can do hand embroidery, there was no way I was going to be able to finish that in time.  Instead, I bought some lace trim that gave a similar look.  I think that it works pretty well.  The fabric for the waistcoat is the only non-natural fiber used.  It is an acetate satin, and while it looks pretty good, even Wade noticed that it doesn’t feel as nice as the silks I usually prefer to use.  The buttons on the waist coat are rhinestones.  While I don’t think they had rhinestones in the 18th century (although “paste gems”, which are similar, are found further back than you’d think), I bet that if 18th century men had them they for sure would have used them.
The breeches and frock coat are both made out of a midnight navy wool suiting from Fabric Mart Fabrics (my fav!!).  The show costumes are silk or a wool/silk blend so they are much shinier.  I would have loved to get some wool/silk (Mood has a line of wool/silk that is absolutely gorgeous), but the wool was much more economical.  I even have several yards left over to make into something else.  The breeches are constructed much differently from modern pants, and are not that flattering.  Those in the 18th century didn’t really care how they looked because they were always covered by the waistcoat and frock coat. 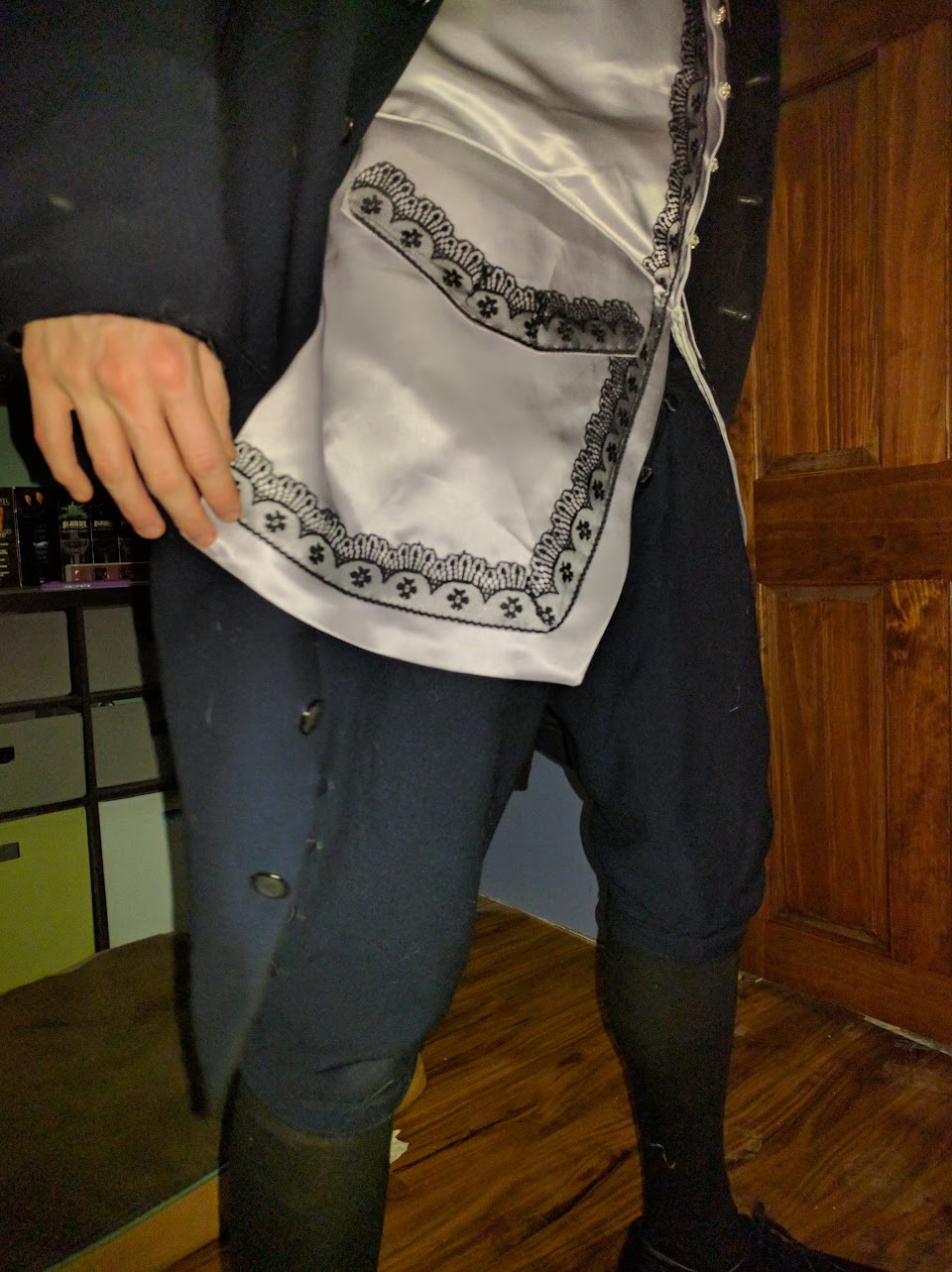 I have to say, I love the look of the frock coat.  The skirts are just so dramatic.  If my arms were about 8 inches shorter, I might steal this coat.  However, Wade likes it also so it’s a good thing I can’t steal it.  He has actually been wearing it as normal clothing, which is one reason we kept it fairly unembellished.  In fact, we were in the grocery store the other day, and he got a compliment from a stranger.  What seamstress doesn’t get a little kick out of that? 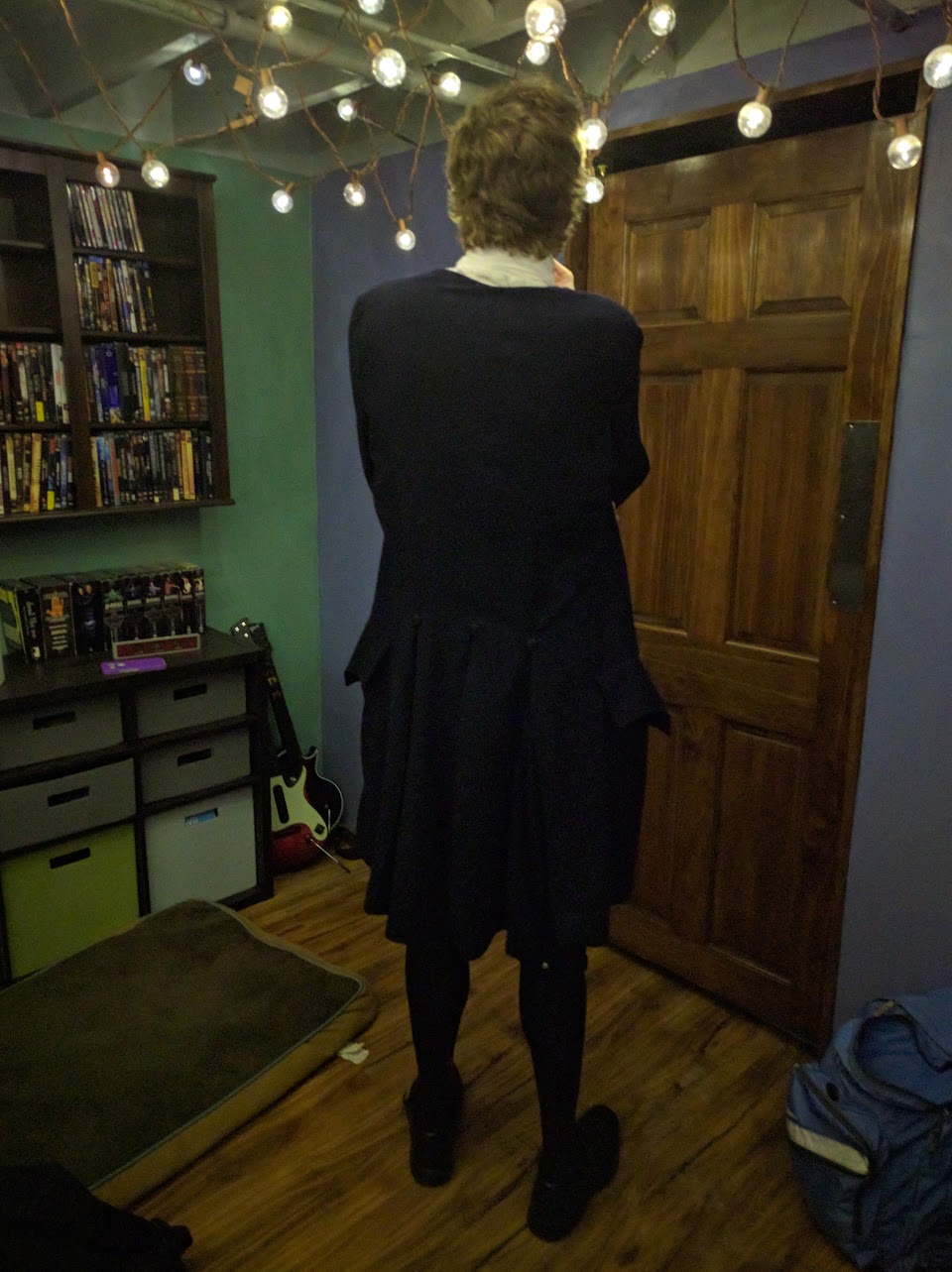 The only thing I did not make was the stockings.  I bought black for Wade because in the show, Jamie has these awesome boots.  While I would have loved to find some similar, they probably would have been way too much.  I thought about trying to make some gaiters that had the buckles and using those to mimic the boots (I even have an old pair of black pleather pants that could have been used as material).  It would have been a lot of extra work, and Wade wasn’t into the idea.  In the end I figured giving him black stockings would approximate the overall look.  His shoes are just his regular dress shoes.
Well, that’s it for our Halloween costumes this year.  I’m already musing on what I might want to make for next year.  I’m thinking about letting Wade pick since I kinda railroaded him into doing Jamie and Claire.  However, these costumes are getting another outing.  Wade and I are heading to historic Williamsburg in the spring, and we are already planning on wearing them to dinner. 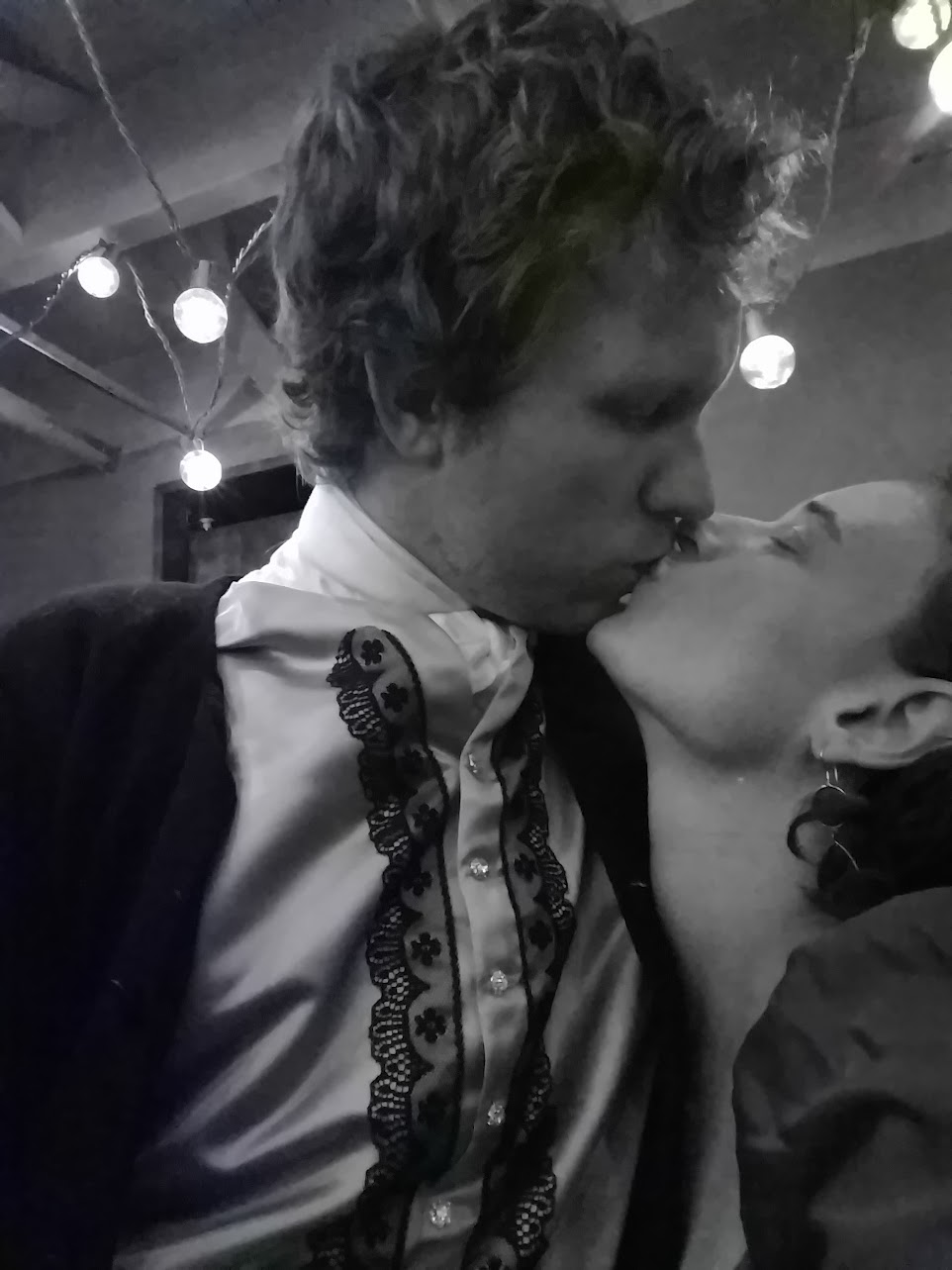