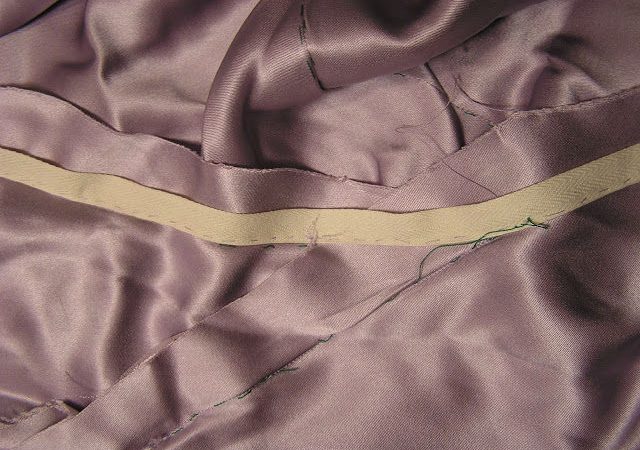 OMG, it’s finished!!!  To get caught up on my process so far see my first and second posts.  The main construction of the dress went pretty fast, but then I didn’t work on it for months.  One thing I noticed was that sewing this dress has made me care about the state of my nails more than I ever have in my life.  The satin is so smooth that it snags really easily.  As a result, I had to keep filing my nails and even my skin to avoid snags.

As I showed in my previous post, I thread-traced the seam allowances, so the seams were sewn by carefully aligning the seamlines.  Once the seam was sewn, I removed the tracing thread.  There was a bit of tricky sewing inserting a gore into part of the skirt, but luckily I pretty much got it right on the first try.  My silk is actually sturdy enough that unpicking is not a disaster.  In addition to using twill tape to shape and support the back neckline, I made a back stay out of a shirting cotton to reinforce the straps.  They are quite narrow, but they support the entire weight of the dress, so I felt they could use some extra support.  (Ordinarily, I could add extra support using a waist stay, but the low back precludes this.) 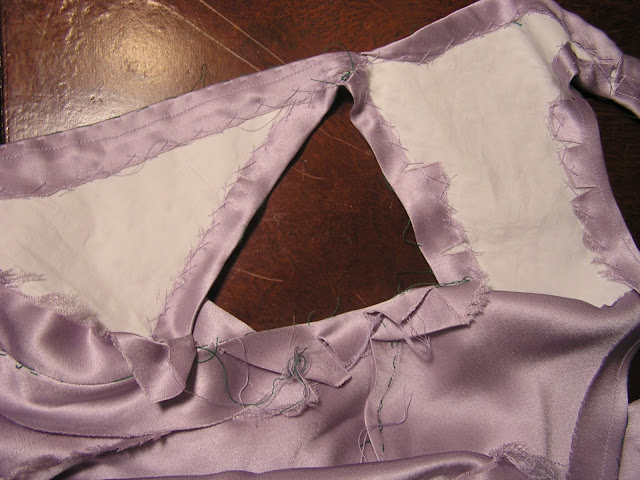 Once the dress was constructed, the large seam allowances were pressed back to essentially form cut on facings.  I used pinking shears to tidy everything up a bit.  The lining was then hand stitched to the “facings” using a fell stitch.  The final step was the hem.  I had to wait to do the hem because I had to buy the shoes that I am going to wear at my wedding.  I had Mr. Kiri Knits help pin up the hem evenly.

The hem actually gave me more trouble then I thought it would.  First, of all, I thought I had left a generous amount for the hem, but in some places I barely had enough.   I used horsehair braid to give the hem a bit more structure, then it was blind catchstitched up.  I had never used horsehair braid before, and when I finished, I realized the braid showed way too much.  To fix it, I undid the hem, put a strip of fabric behind the braid them re-sewed the hem.  It does look too pretty on the inside, but I think it looks better on the outside.

I can’t believe it’s actually finished!  It has always been a dream of mine to sew a wedding gown and now I have.  Unfortunately, the full reveal pics won’t be forthcoming for awhile– I’m not getting married until May.  My wedding sewing is basically done; the only thing I have left is one elbow length glove.