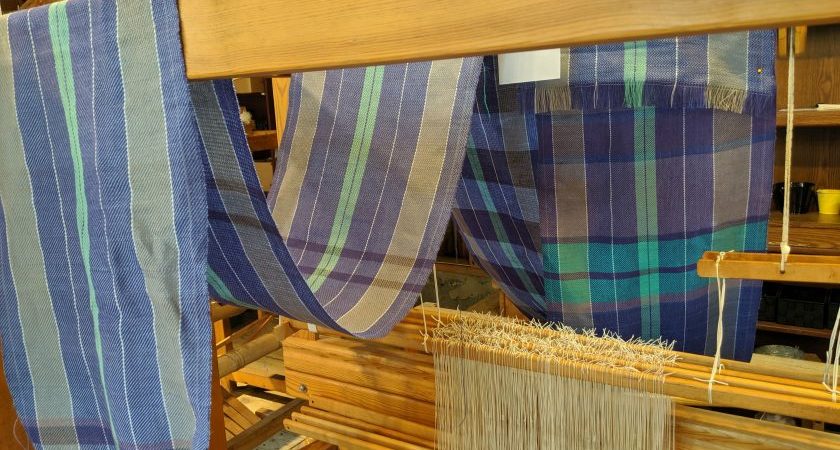 I am spending this fall at Vavstuga Weaving School in Massachusetts with four other students. We are staying in a farmhouse, and I had to include a few pics of the property, because it is a truly gorgeous place.

I am learning from an amazing teacher, Becky Ashenden, who learned to weave in Sweden. Although I have picked up a bit about weaving here and there, I have been struggling to feel confident in doing it myself, which is one reason that I decided to come here.

One of the first things I learned was why it is really valuable to be learning the Swedish tradition of weaving. Unlike American handweaving, the Swedish craft was mostly preserved intact despite industrialization. The way that we are learning to dress the loom has lots of little seemingly not that important steps, but when you put it all together, you get really good results, even if it is your first time weaving (as was the case for two of the students in my class).

Another thing I learned right away was that Becky has a fix for almost any mistake. Although it was annoying to be the one whose mistakes had to be fixed, I know how valuable it is to have ways to fix things. I was especially glad that she had fixes for two really glaring errors I made when winding the warp for our first project.

However, the biggest thing that I learned in my first week was that I am really bad at sleying! Even though I thought I checked, I ended up having three sets of doubled-up threads and two empty dents. I ending up having to re-sley about half of my project, a towel. In some ways I feel that I am re-learning an old lesson that I learned with sewing. When I first started sewing, I was always rushing through prepping the pattern and pressing the fabric and cutting out. Because sewing is about sewing, right?! What I finally learned is that taking the time to do a good job at all those preliminary steps makes your finished project much better. If you mess up the cutting, you are just making more work for yourself trying to fix it as you sew. Well, big surprise, same thing with weaving; it goes much better if you take the time to do it right rather than rushing to get to the weaving part.

So, in the end, my biggest take-away is that although knowing fixes is great, it is still better to double-check each step to get it right the first time. I took this lesson to heart when working on my next project, a 4 meter length of 1 meter wide yardage. I really did not want any sleying errors with 960 threads!