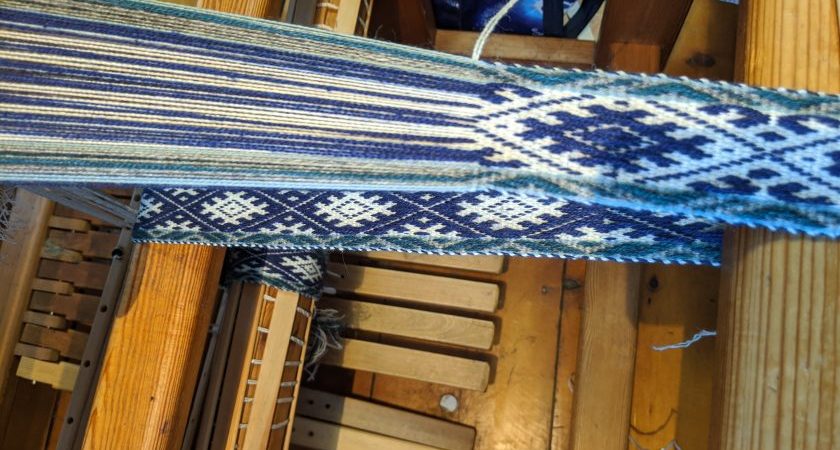 This was my final project that I completed at the Vävstuga Immersion Program. (My first post about my experience is here.) I was trying make as much use of my time there as I could, so I made this band in four days. I think that I would have enjoyed the process much more if I hadn’t been so stressed out about finishing in time. However, I definitely don’t regret making it. I’m glad I learned one more technique, and I love the finished belt.

This type of band would traditionally have been woven with a backstrap. I did learn how to do this, and I even wove a simpler band this way. In my simple band, there were only 7 pattern threads. To create the pattern, I had to pick-up the appropriate threads in each row. I used a small rigid heddle to create the plain weave.

In my belt, there were 30 pattern threads. I am very impressed by the traditional weavers who were able to weave these bands with a backstrap. It would not be easy to keep track of that many threads. Instead, I wove this band on a floor loom. I still had to do the pick-up by hand, but it was much easier because I set it up so that all the pattern threads were on one shaft. By lifting that shaft, I could easily see all the pattern threads and pick them up with a pick-up stick. Although I used the shafts to create sheds, I did not use the beater. I still controlled the tightness of the wefts and beat in by hand.

The pattern that I used came out of Estonian Pick-up Woven Belts by Piia Rand. In it, the author examines extant bands and shows drafts of all the patterns. Many of these belts are just stunning. One of the hardest parts of making this belt was choosing only one pattern. If I ever want to make another band, I will probably be buying my own copy of this book.

When I first started weaving this belt, I was worried that I wouldn’t have enough time to make it long enough because at the beginning I was very slow. I ended up weaving 75 inches, which is probably a little too long. The book that I got the pattern from had several different ways of finishing the band, but in the end, I just left it as long fringe. Since it is wool, it probably won’t get much wear during the summer, but during the winter I wore it several times. It really helps to add interest to plain dresses.