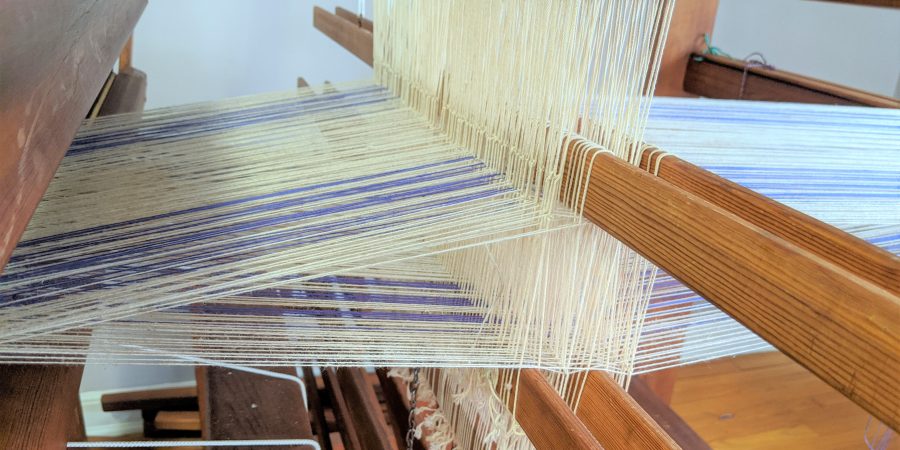 I am writing a series of posts describing the process of weaving. The first post discusses how woven fabric differs from knitted fabric. Today I will talk about looms. (You can also see a video version of the this blog post on Youtube.)

A loom is a machine that is used to turn thread (or yarn) into cloth. They can be very simple, or extremely complex. The most important function of a loom is to put tension on the warp. The warp threads are attached to the loom, while the weft threads are interlaced through the warp.

To show just how simple a loom can be, here is one I made out of cardboard. The loom holds the warp under tension. To weave, I take my weft and weave it under and over the warp. That is the essence of weaving.

Tension can be achieved through a variety of ways. An ancient form of loom called a ground loom basically just had sticks that were stretched out and staked to the ground. This made the loom portable as you could just roll it up with the warp and then stake it out again later. Backstrap looms are another type of very portable loom. With a backstrap loom, you attach one side of the warp to a fixed point. The other end of the warp is attached to a strap that goes around your hips. You can control the tension by leaning further back. Backstrap looms were used to make bands in Scandinavia, but are also very common in central and south America.

Other types of simple looms have a rectangular frame, these include tapestry looms and rigid heddle looms. On these types of looms, tension is applied by stretching the warp across the frame of the loom. Rigid heddle looms and some types of tapestry looms will have mechanisms to form sheds, which is the second main function of a loom. Forming a shed means lifting some of the warp thread to separate them. The weft can then be passed through the shed to weave. This is much faster than weaving in the weft by hand.

More complicated looms basically just make it easier to create different sheds. A table loom adds multiple shafts, so that the weaver can create several different sheds that create more complex patterns. On a floor loom, the shafts are lifted by treadles on the floor, freeing up the weaver’s hands. However, the type of patterns that can be woven quickly become limited by the number of shafts and treadles you have.

To weave more complex designs, weavers used drawlooms and eventually the jacquard loom, which doesn’t have shafts at all but instead lifts small groups of threads individually. I have woven a couple of drawloom projects. Today there are computer-assisted looms that can weave almost any design. But they still perform the same basic functions of putting tension on the warp and lifting warp threads to create a shed.

In my next post, I will talk about how to plan a weaving project.