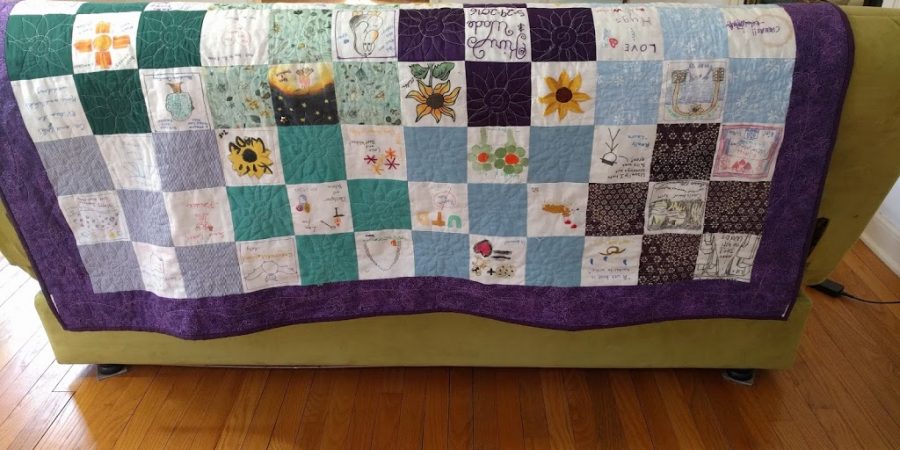 I have a really fun project to share today!  Instead of doing the usually guest book for our wedding, we asked guests to make quilt squares.  I was expecting that most people would just write something and sign their name, but I don’t think anyone did that!  I was blown away by our guests creativity, and the reason the quilt turned out so well is mostly due to them. 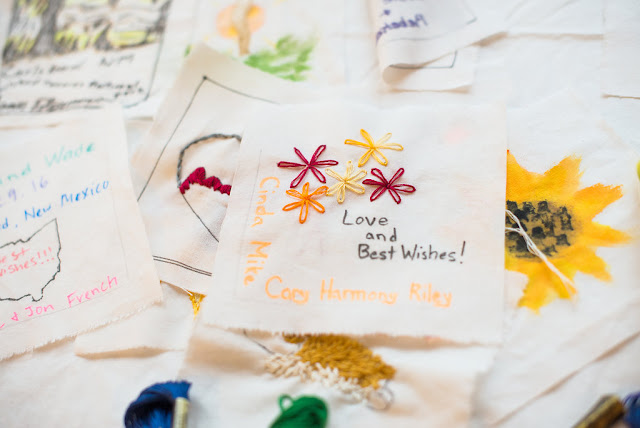 Here’s a quick rundown of how we did this.  We bought some basic white quilting cotton, pre-washed it, and cut 5 inch squares.  I embroidered a couple of squares to give some examples.  We wrote up some brief instructions so that people had an idea of what to do.  My mom also made some plastic guides that helped guests to not decorate into the seam allowances.  We bought a set of fabric markers, a set of fabric paints, and embroidery thread.  We also provided needles, buttons, and scraps of fabric.  I think that part of the reason that we got such great results was that our wedding celebration lasted a whole weekend so that people had plenty of time to work on their squares. 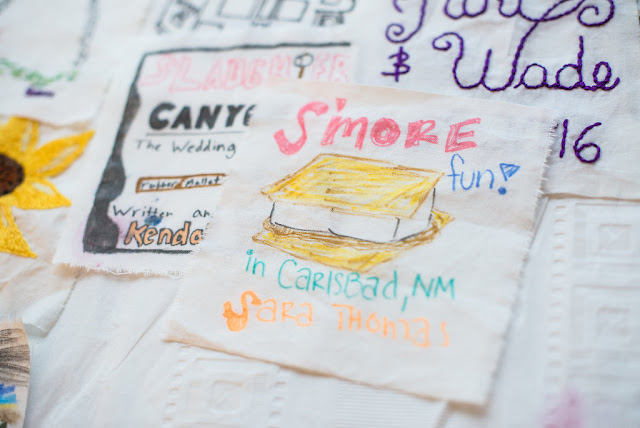 I knew that I wanted to assemble the squares into 9 by 9 blocks using my scrap squares.  At first, tried using totally random squares, but that didn’t look good.  Instead, I used 4 or 5 of the same scrap squares for each block so that they were a little more cohesive.  One all the squares were assembled, I arranged them so that the sunflower block with my embroidered squares was in the middle.  The scrap squares in this block are from the bridesmaid dress fabric. 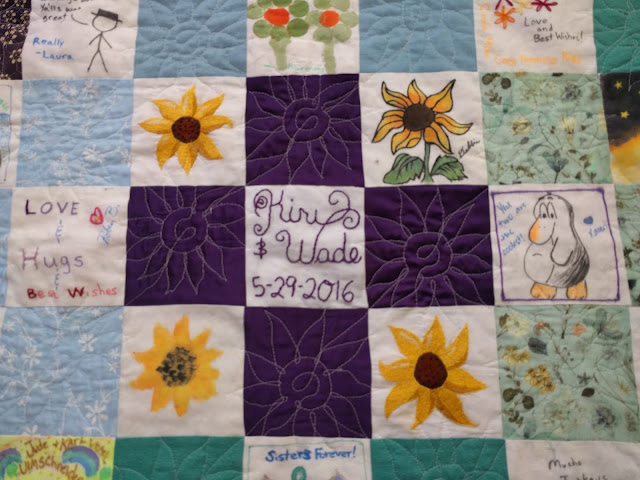 I originally planned to have the main quilt top, then a border, then a border of smaller 9 by 9 blocks, then another border of sunflower fabric.  However, once I made the blocks and laid them with the top, it looked too busy.  I ended up just doing one border.  This made the quilt slightly smaller than I had anticipated, but still plenty big for a lap quilt (unless you are unreasonably tall– it is just a tad short for Wade). 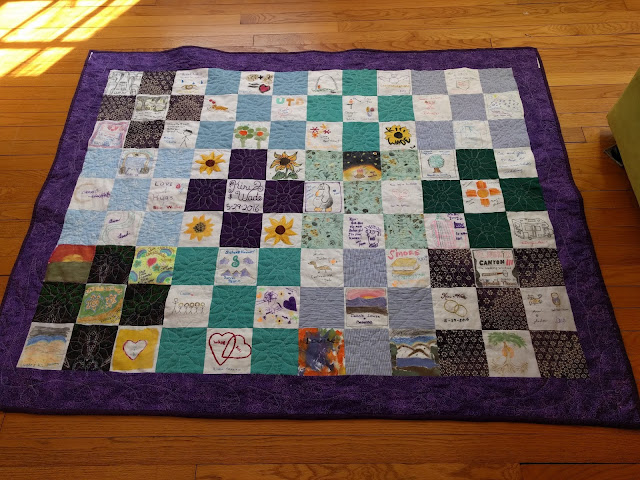 The next step was the actual quilting.  For my big king-sized bed quilt, I outsourced this job, but I wanted to do this one myself.  I have done straight-line quilting of a baby quilt before, and I have free-motion quilted some smaller projects such as table runners, so I have a grasp of the basics.  I really wanted to do a sunflower motif as that was our wedding flower.  I picked a solid purple backing fabric so the white flowers would really show up on the back. 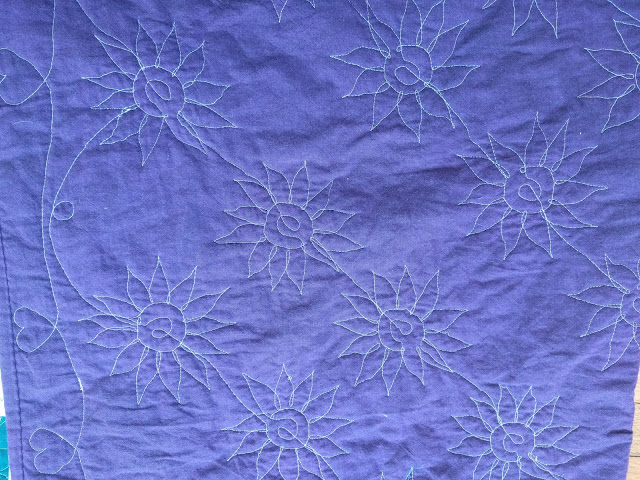 For free-motion quilting, you have to complete it in one connected line.   First, I doodled on some paper to come up with a design that was continuous and managed to resemble a sunflower.  I then made up a practice square because drawing with a sewing machine is not as easy as drawing with a pen.  For free-motion quilting, you turn off the feed-dogs that normally control the movement of the fabric under the needle.  The movement of the fabric, and by extension the length of the stitches, is totally controlled by your hands.  In addition to helping me practice the motion, the test square also let me adjust the thread tension.  The goal is to have stitches that are correct on both sides of the quilt.  As you can see below, I did not manage to achieve this all the time, but it’s good enough.
Once I managed to get not completely horrible looking sunflowers, I moved on to the actual quilt.  My plan was to put one sunflower in each scrap square.  I did not want any stitching to detract from the decorated squares.  My first few squares, I kept each flower strictly in the square, but I thought they looked too puny.  For the rest of the quilt, I still centered them over the squares, but I allowed the petals to stretch into the neighboring squares.  For the border, I did some hearts connected by a curvy line.
I will be the first to say that not all my flowers are perfect.  This is definitely the kind of thing where the perfect can be the enemy of the good.  Even though many of the flowers may look a little wonky if you look too closely, I am really happy with the overall effect.  More importantly, almost no one will be looking that closely at the quilting when it gets used.  In fact, we have been using the quilt a ton already!  I definitely did not make it to just hang on a wall. 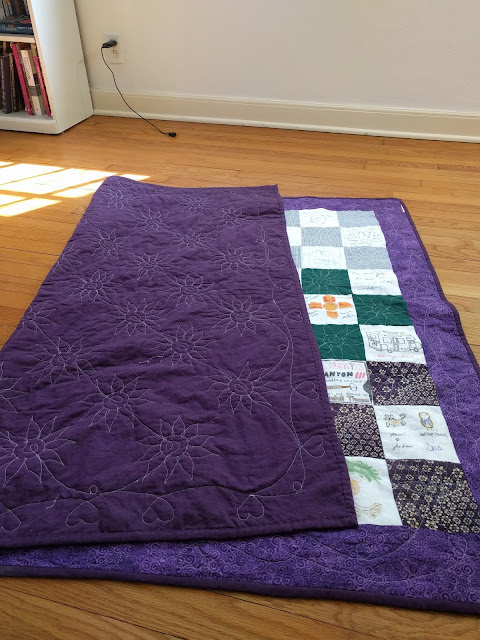