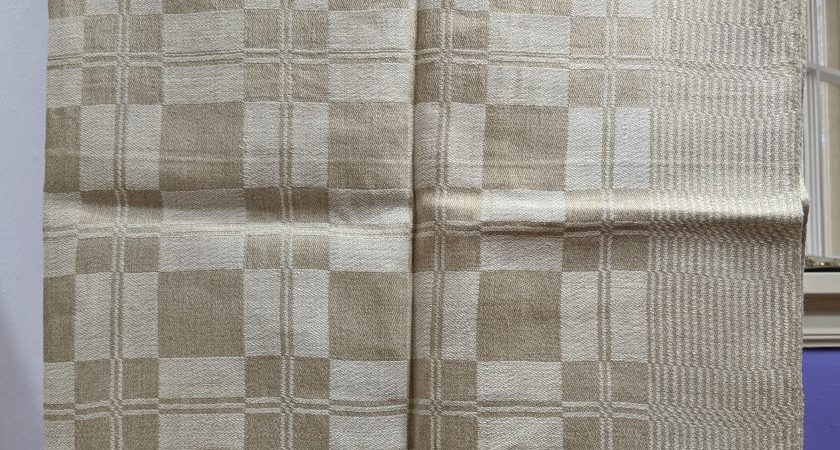 Out of all the things that I have made while at the Vävstuga Immersion Program (see this post to learn more about where I studied weaving for 15 weeks), this tablecloth is the one thing that I look at and really can’t believe that I made.

For starters, there is the material, which is somewhat fine (16/1) single ply linen. Anyone who spins or who has worked with single ply yarns knows that a single yarn likes to twist on itself. This fine linen was particularly difficult. Every step, starting with winding the warp, was more difficult than with more well-behaved yarns. Even counting the threads in the cross was harder.

Dressing the loom was also more difficult, because we wanted to make sure that we had the pattern threaded correctly. This was our first project working with more than four shafts, and we had to deal with ten. There were also just a lot more threads because it was so fine. My yardage (which you can read about here) had 900 threads. This tablecloth had almost 1600. We definitely made several threading mistakes, some of which didn’t get spotted right away.

It was also a challenge to weave this, partly because of the yarn and partly because of the structure. The structure is a 5-shaft satin, which requires you to beat quite hard to get the right weft density. Since the yarn is just a fairly fine single ply, it is inevitable that you will break threads. I think a big part of what we were supposed to learn from this tablecloth was how to repair broken warp threads.

Despite all the difficulties, I really enjoyed this project. Although I tried out a couple of colored wefts, this was the one project that I didn’t feel the need to do in color. For such a classy piece, the white and unbleached just seemed right. After hemming and using the cold mangle (a machine that presses the fabric without using heat), this tablecloth looks and feels amazing. In fact, it looks so nice that I have a hard time believing that I made it. Now, if only I had a loom with 10 shafts so that I could weave another…

2 thoughts on “I Can’t Believe I Made This: Damask Linen Tablecloth”