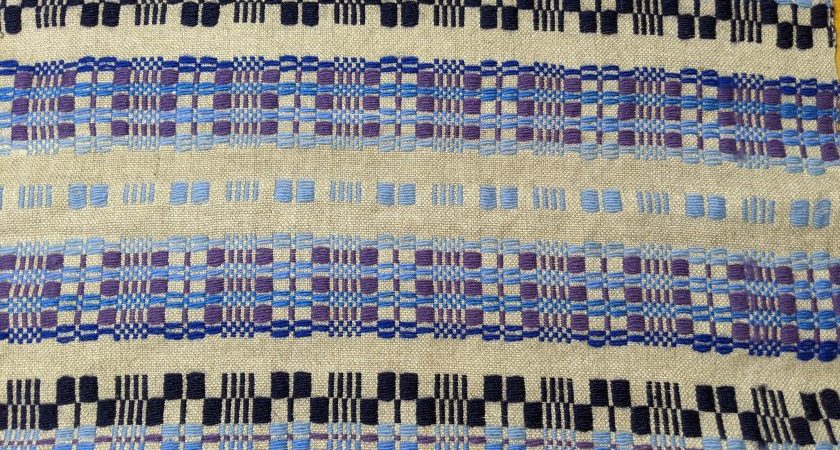 This post is about two different types of weaves that use a plain weave ground and pattern floats to create a design. All of these are projects that I did while attending the Vävstuga Immersion Program (see here for my first post on the weaving school).

The next technique is overshot, which also has a pattern over a plain weave background. However, unlike in monksbelt, overshot includes areas of plain weave in the pattern, called half tones. Overshot also uses more pattern treadles than monksbelt, which only uses two. This runner uses 12/1 linen for the plain weave and 6/1 tow linen (which is the same yarn used in this tablecloth) for the pattern.

I had the worst time keeping track of which pattern stripe I was doing, and I ended up having to take out a lot. One thing I learned quickly was that linen like this really likes to stick to itself. I could only “unweave” about 3 picks; more than that and I had to cut it out. I’m glad I took that time to correct my mistakes because I ended up really liking this runner. There was a bit of warp left over at the end, so I also played around with making a little placemat.

There is a lot more that can be done with these techniques; these little runners are really just scratching the surface. For instance, overshot was often used to make absolutely stunning coverlets. I am happy to have been introduced to these weaves and hope to do more in the future.