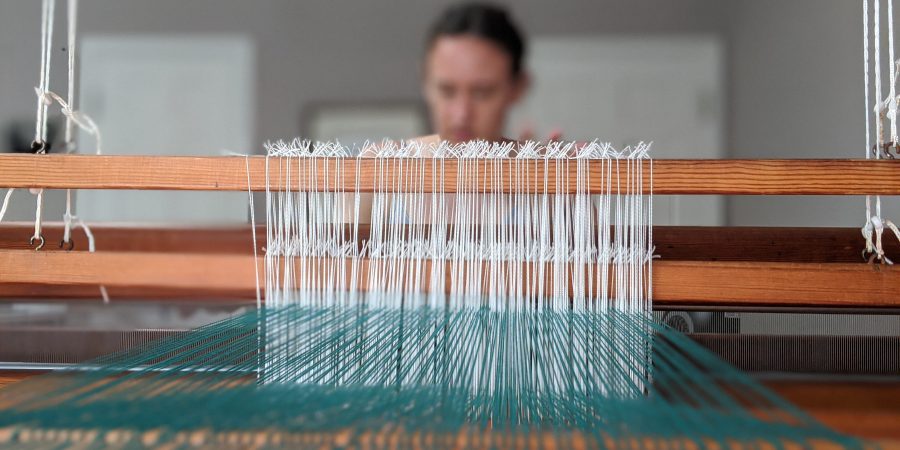 I am writing a series of posts describing the process of weaving, from thread to cloth. The first post discusses how woven fabric differs from knitted fabric. Last time I talked about dressing the loom. This week, I talk about the process of weaving and the excitement of seeing the cloth come to life. (If you want to see more of what throwing the shuttle looks like, the video version of this post is on YouTube.)

As seen in the previous posts, weaving takes a lot of set-up. However, one thing I had to learn as weaver was not to be impatient in dressing the loom. It is all part of the process, and shouldn’t be rushed. It’s similar to sewing in that way; I used to feeling like only sitting at the machine making stitches was sewing, and I would be impatient with prepping the pattern and cutting out. Once I re-aligned my thinking, I realized that the prep and cutting out is just as much sewing as the actual stitching. It’s the same with weaving.

That doesn’t mean that it’s not exciting to finally sit at the loom and see your idea come to life! Sometimes when I have a new warp on the loom I feel that it calls to me, “Don’t do the dishes, Kiri, come weave instead!”

So, down how do I turn thread into cloth? On a floor loom, I press on a treadle, which, since it is connected to one or more shafts, will lift some threads but not others. The opening between the threads is called a shed. I then throw a shuttle, which holds my weft yarn. Once the weft is placed, I beat it in by bringing the beater (which contains the reed that spaces the warp threads) forward. Once the weft is in, I now have cloth!

I then lift the next shed, and place in another weft. The combination of threads that I lift up when I create the shed is what creates my pattern in the the cloth. In the simplest weave, plain weave, the weft thread goes over one warp thread, then under the next, then under, then over. This means that when creating a shed to weave plain weave, every other thread is lifted up. On the next shed, the opposite threads are lifted up. Here it is in action:

That’s all there really is to weaving, but obviously it gets more complicated as you add more shafts and treadles to weave more complicated patterns. To get really fancy, I have actually used a drawloom that has many more shafts that are controlled by hand. Another option that circumvents the limits imposed by a limited number of shafts is to control the placement of the threads by hand.

Although dressing the loom is very important, it really is quite fun to throw a shuttle. Seeing cloth appear beneath my fingers is pretty marvelous. I hope that my readers now understand a bit about what goes into weaving cloth. There is just one more post in this series; next time I will talk about finishing.