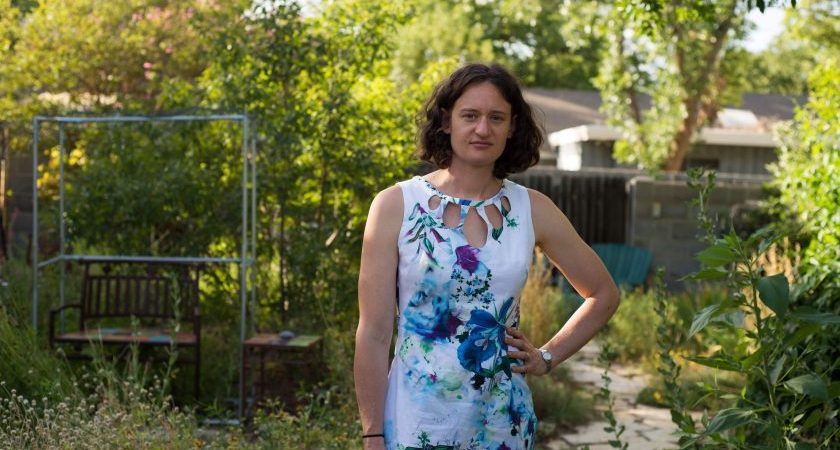 Every year, I allow myself to make one new summer dress.  Summer dresses are my favorite thing to sew, but there are only so many dresses one person can wear.  The dress I made last year is blogged about here.  This year’s dress has been a challenge from start to finish.  I probably should have made a muslin of the bodice, which would have saved me so much ripping out. This dress is Burdastyle 6-2016-112.  It is the “masterpiece” pattern for this issue, most likely due to the tricky nature of the front cutouts.  The fabric is a large scale floral on a stretch cotton sateen that I got from Mood Fabrics (online).  The print is basically a panel, and I had four panels to work with.  This limited the amount of pattern matching I was able to do. The first challenge was cutting out.  I really wanted the front bodice and skirt to match.  It doesn’t match all the way because the seam is curved, but I think I did a decent job.  Due to my fabric limitations, I couldn’t match the back.  However, I did try to line up the bottom edge of the panel all the way around the skirt. Sewing the neckline cutouts went fairly smoothly.  The pattern has you trace the cutouts onto the neckline and then sew the facing to front.  I actually made a template out of cardboard so that the tracing was easy.  Sewing around the curves definitely helped my practice my precision, but I think that they turned out really nice.  The cutouts are then clipped and turned.  Turning some of the narrow bits between the cutouts was difficult.  Although the facing is interfaced, I wish that I had also intefaced the outer fabric as I feel it could use a bit more support. Once the cutouts were done, the edge of the neckline was applied.  Originally, I was going to replace the hand sewing with machine stitch-in-the-ditch, but then I realized that that wouldn’t work because for the teardrop cutouts there is no “ditch”, so I hand sewed instead.  The rest of the construction went smoothly until I applied the zipper, which I managed to sew in a mobius strip three times.  I was pretty annoyed at the end of that. I sewed the back seam and zipper before doing the side seams (which I think contributed to sewing the zipper wrong) because I knew that I would need to do some fitting.  I cut a 42 based on the finished bust measurement, but I knew that it would almost certainly need to be taken in on the skirt.  Once I tried it on, I realized that I really should have cut a 40 because the only place that it fit was the bust.  Even there, the bust darts come too high.  Everything from the waist down needed to be taken in significantly.  I even ended up opening up the back seam to take it in and also to do a bit of a sway back adjustment using the back waist seam.  Even once I made all these changes, I’m still not happy with the fit. The back bodice also gaped significantly.  The back teardrop was probably standing 2 inches away from my body.  Ideally, I would have re-cut, but I did not have enough fabric for that, so I had to get creative.  I removed the finishing strip at the neckline and cut two inches off at the top of the teardrop, grading it into the original neckline.  This both shortened and narrowed the back.  I then re-attached the neckline strip.  It certainly isn’t perfect (it still gaps a bunch), but it is acceptable.  In the future, I definitely will stick with the size 40; if I feel the bust is small, I will do a full bust adjustment rather than go up a size.  Also, I’ve learned that for something like this dress that is hard to fit (due to the cutouts), I really, really should make a muslin. After wearing the dress to my mom’s birthday party, I actually feel better about it than when I first finished it.  I still really love the fabric, and the cutouts are fun.  I think the fit is probably something that bothers me way more than anyone else.